Auckland deflation- Noosa is next

To finish off my World Triathlon Series with a solid performance and another top ten would have been the perfect conclusion to my 2012 campaign. No matter your preparation or level of determination to succeed, Triathlon is not an easy sport and will always throw up challenges. The Grand Final of the World Triathlon Series (WTS) was held in chilly Auckland with the Elite Women’s race being held on Saturday at 12.15pm. Many people assumed I would have been racing in the U23 race, although I was always preparing to race in the Elite category. I had being racing in the elite series for the duration of 2012 with consistent top ten’s, so I relished the opportunity to represent Australia in my first senior World Championship. I was extremely eager to finish the year on a positive note, very excited for the trip to Auckland. Unfortunately I got a puncture on the bike and the chances of me producing a decent result became impossible.


Once arriving in Auckland on the Wednesday, we experienced all four seasons, sometimes even within the hour. The bike course was a brutal 8 lap course with 3 decent hills to navigate each time around. Steep downhill’s with corners at the bottom meant that the unpredictable weather could become a factor in the race come Saturday. I was very fortunate that Auckland kept the roads dry for my race, with the rain being was one less element to contest with. The water temp was 14.6 degrees, wetsuits were most certainly mandatory... and in my case, a thermal cap plus two another lycra caps were in use :) The previous week I had been feeling a little run down and tired, although I had adequately prepared myself with some rest and a good taper. To be completely honest, I felt a little drained during the swim, there was lots of fighting going on! The first part of th bike was quite tough, although I felt very confident through some of the fast downhill sections. Unfortunately when I got my puncture I had to complete most of the lap riding on my rim. Going up and down the hills was rather difficult but I managed to get around the course unscathed to change my wheel. The race was well and truly gone for me at that point but there was no way I was going to have a DNF against my name. I got a few sympathy claps from people who thought that I had just blown up big time; I think that was the most embarrassing part! 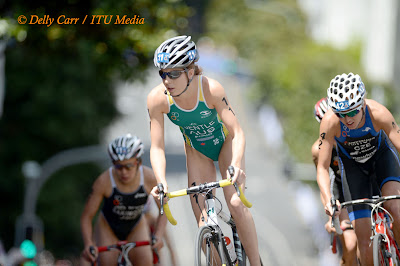 I walk away from the weekend feeling disappointed. I recognise that the puncture was out of my control although can’t help but feel like I let people down. I was so grateful my family had come to Auckland to support me and the crowd was absolutely amazing!! If you were out on course cheering I would like to take this opportunity to thank you, it was an incredible experience. Despite the puncture, I am happy that I got on with the race and made sure I finished, even though I was crossing the line far from where I would have liked. The race of the day went to the U23 men, an amazing team effort which saw Aaron Royle take out the win, it was inspiring to watch. It was also great to see Josh back on the ITU scene and driving the bike pack to finish in 11th, making the day a whole lot brighter. Congratulations also to all the Australian Age Groupers who raced on the Monday, we had a strong team of over 600 and won the medal tally!

I guess I can say that I am proud of my efforts in 2012, my first Elite series and finishing in 15th in the overall rankings. Thanks to my coach, Craig Walton, I've started doing things that I thought weren’t possible- my training load slowly increasing and remaining fairly consistent. Many times during the year I have learnt to adapt to different training when dealing with a few little injuries or misfortunes, learning to put faith in my running ability (and the power of an elliptical!). Also to my swim coach Denis Cotterell, he has been spending some extra time helping me with my stroke and I appreciate his time. He is the best in the business and for him to have faith in me and my swimming gives me confidence for the future....lots of hard work and a few more years under my belt, I am determined to not be chasing for once ;)

The second last World Triathlon Series race was an easy 8 hour flight from the Gold Coast. Not long after landing in Yokohama, Japan, we were treated to some strong winds and much cooler temperatures than I had anticipated. There was a typhoon further south along the coast of Japan and it created a little bit of concern amongst the organisers and athletes. The forecast for race day was clear and calm and everyone was desperately hoping that this would be the case, although it was a little hard to imagine when looking out to a bay full of crashing waves! Nevertheless, we woke early Saturday morning to mostly clear skies and calm waters, race time! 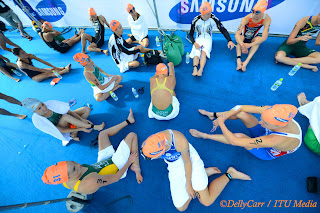 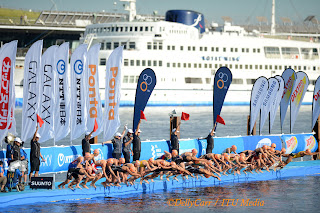 The field was far from full, although the talent amongst the athletes still meant for a very competitive race with 7 of the top 10 ranked women making the trip to Japan, including many Olympians. As I had already anticipated, the swim had the potential to break up more with fewer athletes. Once the elastic band broke, it was always going to be hard for us in the chasing pack to get sucked along. Although we weren't in the ideal position, I was happy to exit the water with people like Maaike Caelers, Barbara Riveros and especially Anne Haug, as I knew all these girls were strong runners and would want to try and help reduce the deficit on the bike. Sometimes it is hard to understand the dynamics of the race unless you are in it, so although it was unnecessary, it was very nice of both Anne Haug and Maaike Caelers to acknowledge my efforts on the bike in their post race interviews. Anne and I pulled the majority of the turns to catch up the deficit in 3 laps. I then sat in for most of the ride until I made a little break on the last lap coming out of the U-turn. No one came with me and found myself with a little gap, I couldn’t help but think what I was doing was totally ridiculous and didn’t fully commit. I got myself a clear entrance into t2, but not much else. 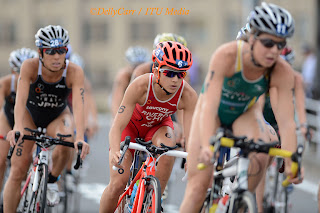 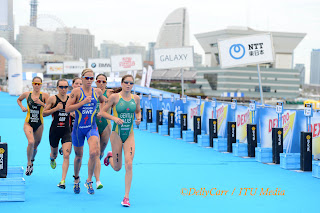 Once I was onto the run and I had found my rhythm, I worked my way into the lead run group. I eventually went to the front and lead for most of the first 2 laps. The five others girls I was running with included Anne Haug, Lisa Norden, Emma Moffatt, Maaike Caelers and Erin Densham. I tried to break up the group but I was stuck in one gear and after sitting back when Moffy took the lead, I came to the front once more. The running was very tactical and unfortunately the group of six stuck together until about 500metres to go and I didn’t have the kick to go with the girls as everyone was trying to sprint for the line. A little disappointing to be the last one from the run group but I was satisfied by my race and that I tried to be aggressive and put myself out there. Congratulations to Lisa for the win, Anne with silver and Maaike with the bronze. Aussie chicks 4th, 5th, 6th! I have come away from the race with things (physical and mental) which I know I need to address in Auckland and for the seasons ahead. 6th is my best result in a WTS race over the Olympic distance and now have made it lucky number 7 top tens from 7 WTS starts. I had no idea how many of the WTS races I would even be getting starts for this year, so I am very pleased to have kept things consistent. I will be representing Australia at my first senior elite World Championships in Auckland in three weeks and am hoping to finish off with a solid result.
Thanks for reading.
Posted by ash_0225 at 08:54 4 comments: 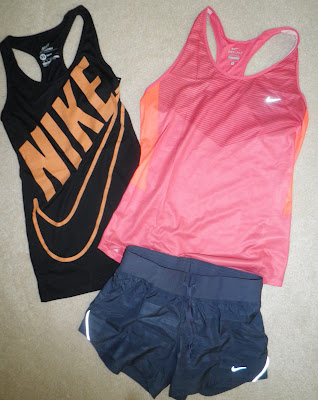 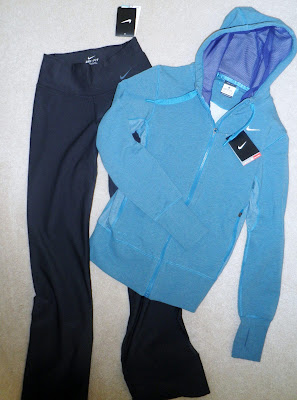 Stylish Nike....Nike 'Relay' tank top with ruching detail at the racerback and sides. Possibly my favourite item is the 'Uptown Epic Crew' long sleeve top with soft woven fabric being the stylish darker paneling at the back. Loose fit around the neck and shoulders with tight fitting sleeves. 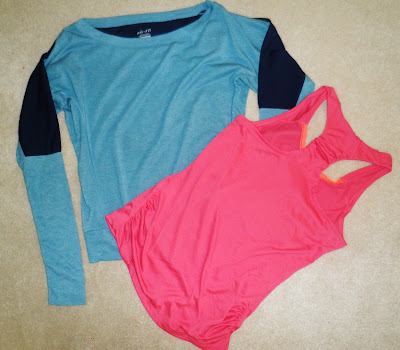