I have just come back from my race in Hamburg, although reports from my previous weekend at the Tiszaujvaros World Cup have yet to be blogged, so thought I better start there. This post is a special Dan Wilson edition, my weekends proceedings written from his perspective. I am very pleased to have him guest blog or me and have defiantely come off the winner, Dan's literacy skills are far superior then mine. Thankyou for the continual support throughout the season and for all of the kind words after the race, they are always much appreciated. Enjoy the read...

Greeting friends, and may I initiate by articulating what an honor it is to have my humble ramblings here on the hallowed turf of your host’s blog. Charged with the task of chronicling quite a dominant weekend by Ash ‘Please Be’ Gentle, relax and satisfy your narrative nourishment, as we shall allow our reenactment to be as effusive as Gentles second World Cup win deserves.

Minor hiccups during race preparation are the irksome olive pits that plague most of the triathlon cognoscenti from time to time. In Gentle’s case, by mid-week before Tiszy, trouble was afoot, literally it would seem. After a brief stoush with some strapping tape, Gentle’s foot had come off second best, leaving an allergic reaction causing a blister that would have had the cast of Saw gagging.

Pre-race omens were not all bad however, with amateur prognosticator Gentle having dreams involving miracle breaks on the bike, instigated by her superlative bike skills avoiding mass crashes that hindered the rest of the field, whilst leaving our protagonist riding unscathed. Fortunately for the health of the majority of the female field, these Nostradamus-esque predictions failed to materialise, however the visions were enough to have Gentle captivated by the bike primes, which we shall get to later in this account.

Thus, with no further prophecy’s expounded from the week, our departure on Thursday had come up quickly. Also, ‘Coming up quickly’ was teammate Boxy’s dinner, breakfast, and eventually stomach lining, and unfortunately for the little fella, put paid to his hopes of racing on the weekend, and was lumped with the distinctly unenviable task of traveling to Hungary whist vomiting with the regularity of a metronome. Needless to say, we kept a safe, yet empathetic distance from Boxy during transit.

Upon arrival to Tiszy, race briefing quickly revealed the intricacies of the avant-garde format being trialled this year. The women were faced with racing a sprint distance Semi-Final on the Saturday, needing a top 12 (+ 1 fastest non-qualifier) to qualify through to the final on Sunday, whilst the rest were sent home for an early shower, and presumably, cheering through somewhat gritted teeth on Sunday.

So - onto Semi-Final 1! The swim was 750m, requiring 3(!) laps in somewhat murky water. Given that the first buoy was a ‘generous’ 114 metres from the start line, most were predicting blood at the first turn, evident by the 1st aid officers, paramedics, and most unsettlingly, a priest situated by the swim course. Choosing to give the rest of the field a fighting chance, Gentle (by her own admission) had a dog’s breakfast of a start, and did everything but swim backwards from the start line. Head-start given, some strong swimming and tactical nous, saw Gentle enter T1 nothing more than a few firm pedal strokes from the front bunch, after which the bike ensued without incident, and a large pack arrived at T2.

Onto the run, and tactical smarts dictated nothing more than a canter was in order, as saving some dry tinder for tomorrow was becoming paramount, and Gentle cruised along in 3rd gear, yet still claimed the heat from teammate Charlotte McShane, along with the entire Aussie female contingent, featuring Ash Bailie, Tamsin Mona-Vale and Nat Van-Coevorden.
After a quick massage and ice bath cold enough to make a penguin shiver, the girls were then treated to be able to watch the first of the ‘proper’ races of the afternoon - the mens race (relax ladies, I’m only joking, no chauvinism here...).

Following a well earned sleep, Sunday brought the cynosure of the weekend, with the Final deciding the recipients of the hardware on offer. After some good natured sledging on the efficiency of Gentle’s start, a slightly more focussed pontoon dive saw Gentle with a start Phelps would have been proud of. Having some work to do early on the bike, the ‘Walton Polish’ (i.e. creating tough-as, super strong athletes) had clearly rubbed off on Gentle, as she towed 3 other athletes up the join the main pack. From my vantage point, high on level 3 of the Hotel Phoenix, Gentles arrival caused some drooping of shoulders and gnashing of teeth among some of the lesser credentialed runners.

Unfortunately, I couldn’t quite make out some of the erratic riding and careless saliva disposal that several post race reports described, which would have made for even more entertaining viewing. Sadly despite a Sagen-like attack on the second last lap, Gentle failed to capture her coveted bike prime, getting rolled by a pair of Russians over the last few metres, and thus initiating a Wilson vs Gentle competition to be first to claim a prime this season. Or next season. Or career. These primes are hard, it could take (at least me) a while.

Once on to the run, it was a good-old-fashioned-running duel, with Gentle leading from Dutch youngster Maaike Caelers, who clung like a limpet until the final lap, where Gentle was finally able to break clear to add her second World Cup win to a rapidly expanding resume.
All that was left for Gentle was to splash some Champagne on some Hungarian locals, pocket the hardware, and take $20 euro off me by accepting my challenge to moonwalk the stage to collect her winnings, gaining arguably more cheers from the crowd than during the race.

It was a weekend of hard, fast and exciting racing over the novel format, and one sure to be a hit with triathlon fans everywhere, and clearly a format that Gentle relished. Until the next Wilson-Gentle split album, it’s been a pleasure to guest author.

Very intimidating writing for 'Words with Wilson' himself, but check out Dan's blog for my take on his weekend HERE 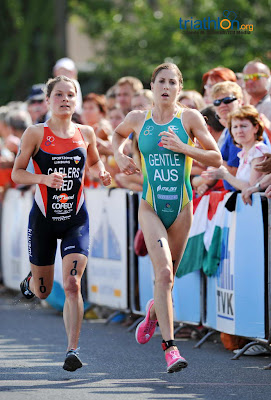 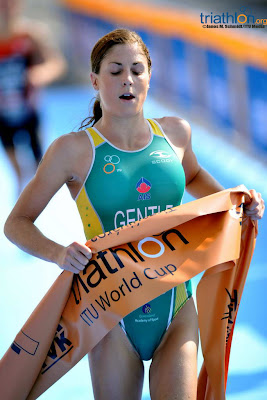 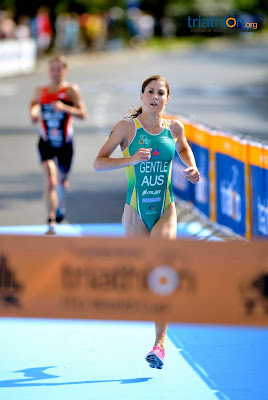 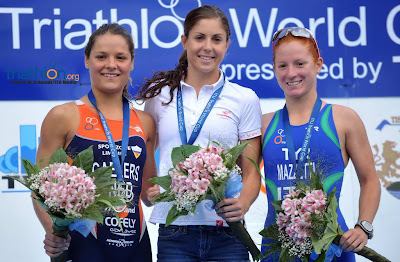 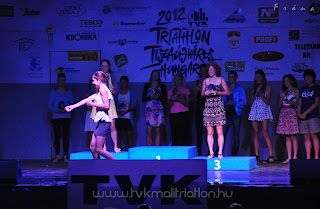 So the six day turn around from Banyoles World Cup had me worried at one point, Wednesday afternoon run after the race  was one of the worst ever! Putting that out of my mind, I left Aix le Bains once again, en route to Kitzbuhel to race in my 5th Worlds Series race on the Saturday. Having 4 top 10 performances in World Series races from 4 starts, I wanted to try and keep this track record going. Once I arrived in Kitzbuhel I was immediately blown away by this little mountain town's beauty, I've always heard great things and I felt privileged to have the opportunity to experience it myself.
Coming out of the water in the second group, I knew I was going to have to do some work to get myself in the race. It was definitely not the time to have a sub-par swim, as all the strong cyclists seemed to be up in the front group, incuding the likes of Spirig, Norden, Hewitt, Samuels, Groff and Harrison. Along with a few others rolling some turns at the front we ended up about 1.30minutes down off the front group coming into T2. I felt confident and quite strong on my bike, not for one mintue wanting to give up, although the gap got out to over 2 minutes at one stage! I loved the course, it's quite challenging with some climbing, fast downhills, cobblestones and some technical sections. Coming off the bike I had nothing to lose, determined to run myself into a reasonable position after pulling lots of turns on the bike. I ended the day with the fastest run split and 10th overall. I was very fortunate to have Josh come from Zurich to support me, a very nice surprise! The next day I packed up and headed to Switzerland myself to spend a few days with him, time to relax with great company!  I really enjoyed my time in Zurich, such a beautiful place, but it was goodbye to Josh once again as I headed back to my training base in Aix. In just over 2 and a half weeks I had resided in 4 different countries!
Here are some pictures from the last week. Thanks for reading. 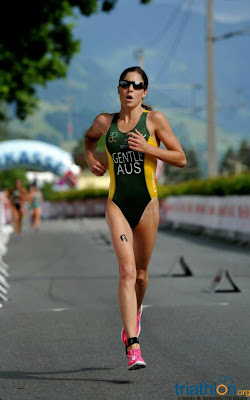 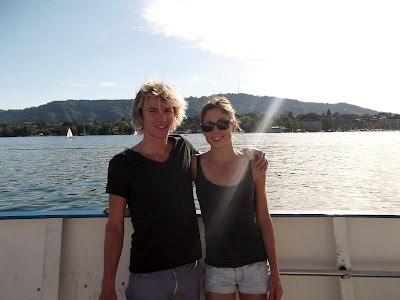