I’m currently in the team van heading back to Aix le Bains after Banyoles World Cup yesterday. It was my first time visiting the country of Spain and Banyoles left me with a good impression. It's a very small town, with one of the main features being the picturesque lake which we swam in on Sunday. 22 degree water temperature made for a non-wetsuit swim around the two lap course. Once out of the water we had six laps on the bike which looped around the lake, with 3 laps on the run in front of the transition area. There was a small hill on the bike which we also ran to the top of on the run which broke things up a little- also a lot harder on foot!

Fairly recently I have joined back swimming with Denis Cotterell at Miami Swim Club, consistantly working on my technique and conditioning in the water. Satisfied with my improvements in the pool, I was eager to convert this to the open water. Although I recognize some things I need to rectify and focus on next race, I am very pleased with my position out of the water on the weekend. After catching up to the main group only a few hundred metres up the road on the first lap, the pace definitely wasn’t on. I almost immediately got myself to the front of the pack and wanted people to roll through with me. The tri-cast may or may not include some footage of my more frustrated side. There were two well established swimmers up the road and although they are not recognized for strong running ability, it was unnecessary to let them get too far ahead or be in danger of chasing packs catching us. The two up front ended up with a 2 minute lead although were caught on the run during the start of the 2nd lap.

I kept myself to the front of the bike pack and after a not so slick T2, I was out on to the run. Erin Densham got herself a blinder of a start, with Gwen Jorgensen sitting on my shoulder for the majority of the first portion of the run, very aware that Andrea Hewitt was trailing just behind us. After Gwen flew past me down the hill, I tried to match her pace and we found ourselves reeling in Erin. After Gwen had passed Erin and established herself a good lead into the finish, I just couldn’t quite catch on to Erin and was happy to finish on the podium behind these ladies after a hard fought run in the heat. I hope to be back to Banyoles, there is a very relaxed atmosphere and I enjoyed my stay. Next race for me is Kitzbuhel World Series race this Saturday, quick turn around but I've pulled up well and am eager to get racing again. I really appreciate all the messages of encouragement so far this year, all the little things count and its nice to feel supported.
Thanks for reading 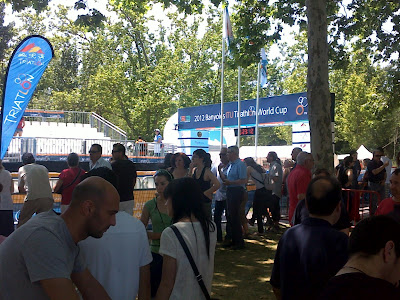 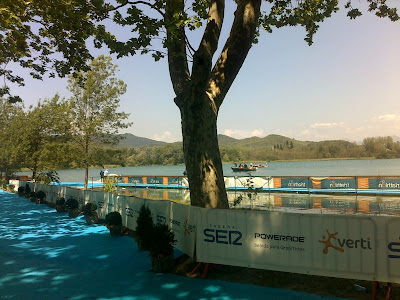 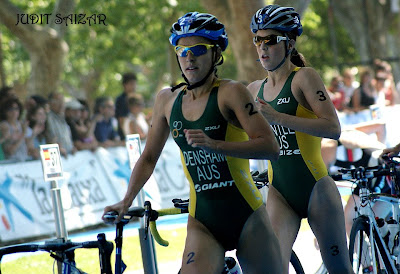 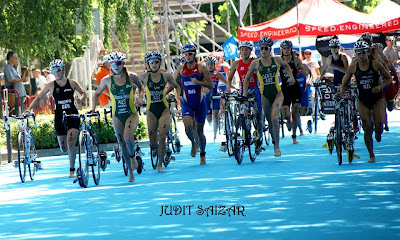 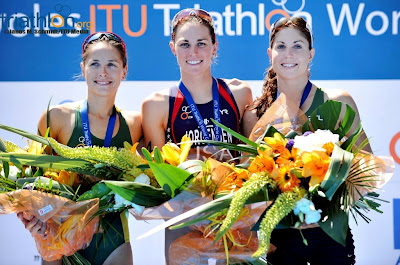