A direct 9 hour flight into Tokyo and a rather quick bus and taxi trip later, I was back in Yokohama to race for the second time this season.
The race in Yokohama was at the end of 2012 in last year’s series, so I quickly became accustomed with the familiar surroundings, even with my below than average 'women’s sense of direction'. My confidence quickly dissipated when I rolled out with (Dan) Wilson and Pete (Kerr) for a casual spin the next day.  No idea which way to go and could not for the life of me remember which direction I rode the previous year. The ride was quickly abandoned anyway, after we decided that rolling 50meters between each set of traffic lights wasn’t in fact considered riding.
The first couple of days in Japan, I felt pretty rubbish. I rested a little more than usual and kept positive that I would be feeling more energetic come race day, and I did, thankfully. My body listened to my mind. Before San Diego, It had been a long time since I had done significant travel and taper into a race, so I held confidence that it would all come together for race day. Number one rule, stay cool.

With a smaller field than usual, I was fully aware that the swim would string out and that there were some strong swimmers who would ensure that this would happen. I remember Adachi swimming solo off the front in Sydney last year, so it was no surprise to me that she led out with Moffy.  I navigated around a group of fighting swimmers, safely onto the feet of a small group. We were off the back of the front group but had a larger group behind us. I had a very quick T1 and start of the bike which put me in a good position with Maaike Caelers and Kate Roberts. I saw Kate McIlroy up ahead and I knew that she would be a good person to work with to catch the front group. On the bike it was the four of us, I worked hard on my turns at the front along with Kate, and after 1 lap we weren't far behind at all, so we caught well within the 2nd lap on the bike. Being in the front group felt great! I stayed towards the front end of the group and accelerations happened here and there, but nothing significant enough eventuated to split the group up over the 9 lap course. The rain started coming down with about 3 laps to go which meant everyone became more concerned with staying upright rather than keeping the pace up. The newly dampened pavement looked like ice, and every single corner donned a big fat pedestrian crossing, and there were lots of corners! The chase groups seemed to be taking a lot more risks because of their deficit and they ended up catching on the last lap. 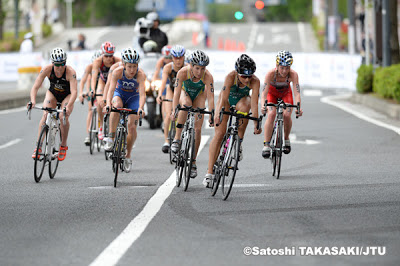 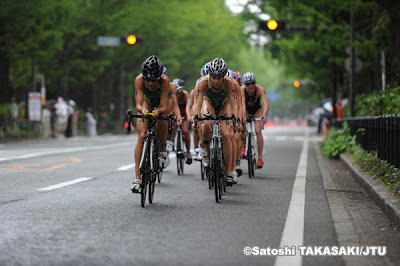 Safe and unscathed, I made it onto the run with much higher hopes of delivering a better run than San Diego. It wasn’t much time in between races, but it was still 3 weeks of salvaging some of my running form pre injury.  I felt significantly better than San Diego and managed to cross the line in 4th place! I was happy, my best performance in a World Series event so far. Congratulations to Gwen on another win and phenomenal run. Also to Moffy and Jodie Stimpson for their sprint for 2nd and 3rd. 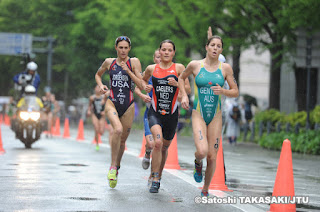 I still don't feel too comfortable running off the bike but I am very pleased the way my running has come back after those long weeks of injury, it has given me confidence for the future. When you think its all doom and gloom, things might turn out a lot better than you think. I've surrounded myself with the right people and this always helps, mentally and physically. A lot of thanks need to be given to my coach, Craig, for his patience and guiding me in the right direction. Also to Britt Caling from Gold Coast Physio and my podiatrist, Ash Mahoney, for the great rehab.
I am back on the Gold Coast for a training block until I head over to Europe at the end of June. The next race for me in on the Mountain side of the Kitzbuhel horn in 7 weeks time.
Posted by Unknown at 17:50