I arrived in Vitoria, Spain for the first time on the Sunday evening before the weekend of Kitzbuhel. I was very excited to be arriving in a new place, as I have been based in Aix, France in previous years. A new culture was to be experienced and unfamiliar riding and running loops to be explored. Anyone that has done the long haul travel from Australia knows that it takes its toll, so the few days that I did have in Vitoria before heading to kitzbuhel were very low key. Next time round, I will allow myself more time in Europe before racing.

The mountain town of Kitzbuhel was just as beautiful as I remembered from the previous year. Quaint little cottages and breathtaking views, and we were there to climb one of the mountains which loomed before us, the Kitzbuhel Horn. 750m swim, 11.55km bike and 2.55km run.

The swim was somewhat of an uphill battle for me too. I hadn’t raced since May in Yokohama and it is enough time to forget what World Series swims are like, especially over 750m. It is no time to become complacent and I had some time to bridge coming out of the water.  Once I was onto the bike Vanessa Raw flew past me and on I jumped on the back to try and make up some time through the town before we started climbing. The group was not far away once we got to the climb and I started making up some ground on ones who had already fallen off the pace. Once a main group of girls was established, I stayed the same distance off the back of them for quite a while. I was never going to be in the race if I didn’t bridge across, but I had nothing to give and the girls up front were quite clearly brilliant mountain goats.

There was more climbing to be done once we battled up the mountain on our bikes, even the transition was even on a pretty decent gradient. I’m quite sure that Alister Brownlee was the only athlete who even attempted to remove his feet from his shoes while he was riding, so the rest of us were left to look rather stupid running into T2 in our cycling shoes. The race was over once I was off the bike, the run was too short to make up time, so it was just a matter of holding anyone off from behind. I finished in 9th place. 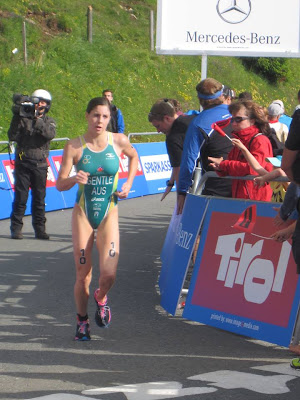 I was satisfied to stay inside the top 10 again, although a little disappointed in myself. Disregarding my place, times or the other girls, I was underwhelmed with the way I climbed after the work I had put into the training. Kitzbuhel Horn is a unique beast, I understand that, but I felt that I couldn’t push myself to the limits in which I had reached in training while on the gold Coast. I wanted to do it all over again to try and better myself.

The girls up front were incredible. Kudos to Queen of Kitz, Jodie Stimpson and Aussie teammate Em Jackson in second. Anne Haug came in 3rd.

I am extremely grateful for the opportunity to take part in such a unique event but I must admit, I was pretty happy that Hamburg was up next. Fast and flat!
Posted by Unknown at 22:56