I wish that my training and form could have continued on an upward trajectory after Hamburg, but it didn’t. My road to London proved to be a tough one, but I was ever so grateful to be there on race day, ready to give it my all. I have had my fair share of injuries this year and the preparation for London was not easy. I think I could mentally handle the situation quite well after being in the same position at the start of the year. When I tore my plantar fascia in March, I went about 7 weeks without running before having to pull myself together for San Diego and then Yokohama. My London scenario was much better and I had a few weeks of running on the treadmill after once again spending some quality time on the elliptical. After racing the individual race in Hamburg, and then the team’s race, I unfortunately got ITB syndrome. It started off as a tiny niggle which escalated quickly after racing back to back. I tried to do a run session on the Thursday after Hamburg and I was reduced to a walk with a terrible pain in my knee. Crippling type pain. This wasn’t good.

It was then a waiting game.

I got treatment every night while I was in Spain and I cannot be more grateful for that. Special thanks to Alex Price who got me to the start line in London and had to put up with every day in doing so! It took longer to settle than everyone originally thought and weeks went by without running. Unfortunately I had to pull out of Stockholm World Series race and also Tizzy World Cup. I was really looking forward to both of those races, but London was the main goal and I wasn’t willing to sacrifice anything for that. While this was all happening I was very lucky that it was the same time that Josh was there to stay with me in Spain. We had a great time living together and helping each other out. I loved Vitoria, there was a comfortable and friendly atmosphere and I really enjoyed swimming with Jamie Turner and the NSWIS troops. I did some very different training in the pool then I was used too, but it was very specific race work and I think it helped me a lot. I also learnt a lot in the open water swimming sessions. There were so many Aussies, Canadians and American athletes that when we all joined forces, we pretty much had a World cup simulation!

The Spanish people are super chilled and it was the safest I’ve ever felt when I was riding out on their roads, I enjoyed that too!

My time in Spain seemed to fly by, and it wasn’t long before I was packing up my apartment and setting off to London. My Parents were on a European holiday and along with family friends, were stopping in at London to watch me race. My younger brother had also been travelling and was there to cheer me on with his friends before heading to Leeds for his university exchange. My family had never been so disbanded so it was nice that they were there to see me. (minus big brother, sorry Scott!).  I didn’t want to let them down.
The weather in London hadn’t been too bad in the lead up to my race on Saturday, but the forecast wasn’t on our side. It was time to forget about that and accept that all of us had to endure whatever Mother Nature served up. 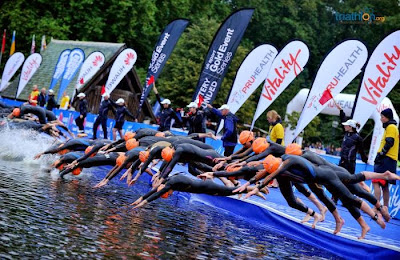 It was an 8.36am start, which was a big contrast to the usual late World Series starts. I was a little nervous, but mainly anxious about my knee and not wanting to let everybody down if things didn’t go so well! 16 degree water which meant my ROKA wetsuit was out and ready.  I had found some confidence in my swimming over the European summer and worked really hard on the second lap to come out of the water amongst the front pack, one of my best swims. I had to put a solid effort in on the first section of the bike to catch up to the swimmers who had quickly formed a little group out of the water. Once I was there, I was thrilled. Stay upright, stay up the front. 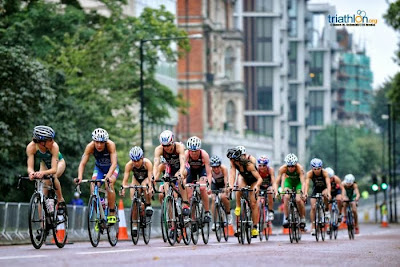 We kept the pace up and were making significant time gaps on the groups behind us. My heart goes out to Gwen who crashed out. I had the wonderful opportunity of getting to know her better in Spain and it wasn’t the ending to 2013 that she deserved. She definitely handled it like a true professional though.

The temperature dropped significantly with about 3 laps to go and it was a little rainy too. I was absolutely freezing. After 7 laps and 42.9kms, I was so happy to get off that bike with hopes to warm up when I was running. My hands were numb and I couldn’t feel my feet. Once I started running, apart from the fact I felt like I was running on stumps, I didn’t feel too bad. We had three laps and at the end of the first, I had caught up to a group of about 5 who were running together. That didn’t last too long. My feet, Achilles and calves were so tight and sore. I could feel my knee a little, but it seemed to be the least of my worries, I thought I was going to tear something! I’m sure that everyone felt pretty average in the cold, but it was the first time that I had run on the road since Hamburg, so it was one hell of a shock to the system. I kept plugging away, more thankful than ever to have had such a good swim and be in the front group! I hung on for 9th and couldn’t be happier to see that finish line. The experience was extremely painful and I had times of serious self doubt, but I actually had the time of my life. I was in London and I was racing and no one could take that away from me. I enjoy training but I absolutely love to race and along with a great support network, I did everything I could to represent Australia at the Grand Final. I ended up finishing 7th on the World rankings, more then I could have wished for at the start of 2013. 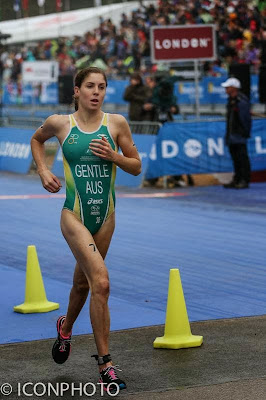 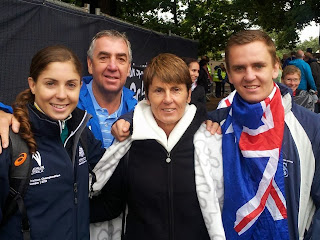 Massive congratulations to Non Stanford, the winner of London and also the 2013 World Champion. Also to Moffy who is off to Commonwealth Games after her 3rd in London. Such a deserving group of ladies standing on the final World Series podium, consistent results from great racing all year. I aspire to be there one day!

After the race and a fun night out celebrating with the rest of the triathlon community in London, I headed to Las Vegas to spend some time with Josh and check out Interbike. I also did the vip SRAM ride and was able to meet some more of the great people behind the company.  I took the opportunity to have a little break from training and that turned out to be a very good thing, it was a super busy week, Interbike is extremely overwhelming!! It was a great experience to be in Las Vegas but I am so happy to be back in Australia, it’s never felt better.

I’m getting back into things and training up for Nepean and Noosa Triathlon. I love an Aussie summer and apart from training my days are mostly filled with friends, good food, coffee shop sits and the beach, I couldn’t ask for much more. Time to relax after a big year!