On Tuesday the 3rd of April it was exactly 6 years to the opening ceremony of the 2018 Commonwealth Games. We had  a small photo shoot at the Southport Pool and I was Joined by London Olympic swimmers Brenton Rickard and Cameron McAvoy, Olympic Cyclist Sara Carrigan and one of the Commonwealth Games Ambassadors.  I have a new found respect for the sport of diving as we climbed the stairs to take some pictures from the 10m platform in order to capture the amazing Gold Coast backdrop. It definately looks like a big leap down to the water and I'll remember that when I watch that event at the Olympics!
It's extremely exciting for an athlete like myself to know that I have a major championship in my hometown in 6 years time, I'll be 27years old and hopefully competing in front of my friends and family. I definately didn't think that when I was taking a few extra pictures at Southport park that I would end up on the front page of the Bulletin! 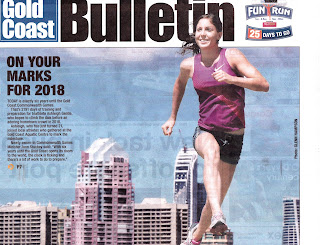 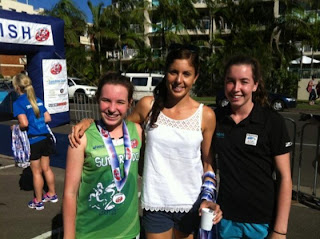 Helping out at the 'Superkidz' race at Mooloolaba Triathlon weekend 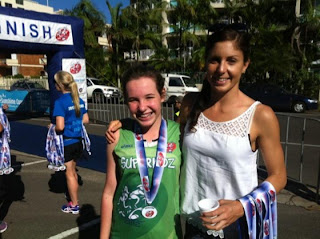 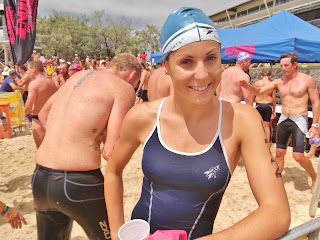 Never too much open water practice
I'm flying to Sydney today for the first round of the World Champ Series. For all the Aussies, the race is live on On HD....the women jumping in the bay at 7.36am so tune in. I've also taken a big step in the world of social media and caved into Twitter, follow me if you like https://twitter.com/#!/AshleighGentle   I'm not too boring ;)
Posted by ash_0225 at 08:12